Briffa’s associates from Germany and Holland explained how copyright could enable a designer to get far further in continental courts then they would in an English court thus negating the reliance on registered or unregistered designs (and all of their associated limitations). Instead designers can:

Dr Jan Ludwig, from the German firm BRP Renaud und Partner, discussed two major cases in his talk. The first, the “Birthday train” case, opened the floodgates for designers to claim copyright in otherwise unprotected work. The second, regarding the “Wagenfeld lamp”, showed that parties from outside Germany could be subject to the German interpretation of copyright, providing that their goods were targeted at the German market.

The design below (the “Birthday Train”) was the subject of a major change in German copyright law.of around £900. In order to claim a larger share of the profits the designer set about convincing the German courts that the Birthday Train was, in fact, a work of art. 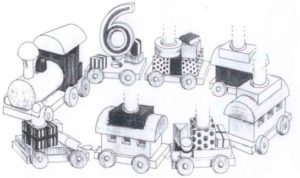 However, the German court reversed this position in the Birthday Train case and it is now no longer necessary for works of applied art to show “outstanding character” to rely on copyright protection.

This transition in copyright protection for designs does not only have a domestic effect in Germany. Foreign companies (e.g. UK companies), which target the German market, must also obey the new copyright framework. In the “Wagenfeld lamp” case the court affirmed a copyright infringement on the basis that the German market had been targeted. The Wagenfeld lamp, was created in 1924 and was acknowledged by the court to be a protected work of art. The claimants issued proceedings against an Italian resident who was selling imitations of the lamps in Italy. German customers could acquire the lamps by collecting the goods in Italy or contracting a carrier for transportation to Germany. However, the Italian retailer was using a German-language website and German print media advertising, suggesting that the business model was aimed at bypassing German copyrights. On that basis, the court said that advertising could be prohibited by German courts.

Designs which are not protected by copyright in the UK (due to the narrow interpretation of artistic works) may still enjoy protection in Germany. Following the Birthday Train case the thresholds for protection in Germany have been greatly lowered and the fair remuneration scheme is in force to protect designers and other creators. This means that UK designers can target infringements in Germany and are entitled to make use of the “fair remuneration” scheme governed by German law. This however is based on a pre-Brexit status and it is currently unclear whether these advantages will be available in a post-Brexit world. It is clear however that the UK approach needs to change in order to improve protection for designers, this might happen with the UK’s own Birthday Train style judgment (although, after Trunki, this seems a long way off) or maybe Brexit is just the catalyst we need to change the approach? This was certainly the hope of the speakers and attendees alike, and, in anticipation of turbulent waves of political change ahead, we all decided to get in some surfing practice!